Once again another busy week, if you haven't noticed we've skipped a TPU! All will be explained in due time. I've made a lot of progress regarding The Clark Doud Project (Seriously need to think of a real name for that), and I've got an entirely new (albeit extremely temporary) project up and running for the Midsummer Jam Week.  If you want to skip to the MSJW stuff just go right ahead and scroll until you see pretty pictures. Anyways, here goes...

The Adventures of Clark Doud

Things I Want To Get Done Next Week (In Priority Order)


The Adventures of Clark Doud

Things in bold are things that I wanted to get done last TPU but haven't gotten working yet. No worries though, they'll get done this/next week. In fact, the really great news is that once these things are done the game will be in a real Beta stage, with the only real steps left being creating more weapons and items, refining features and balancing values. Before I get to that stage however i'd really like to have a name for the game. Perhaps i'll have a look on the Dark Cloud subreddit (which is grossly underpopulated for such a fantastic game) for some interesting names. If you've got an idea for the name you can always throw me a comment, i'll take anything at this point.

I just entered the Midsummer Jam Week without thinking. The theme is growth and the sub-theme is secrets, so I've got a kind-of-weird RTS/Crystal-Growth-Simulation hybrid game in the works called POLYGODS. Since its only a week long and it's already about halfway through the time limit the project is about 85% finished. Sometimes pushing myself is a good thing and this type of thing becomes evident when I actually get something done! Like this: 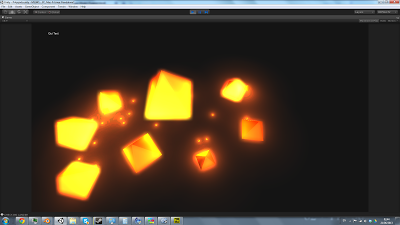 I think it looks quite pretty. What you're seeing is a collection of glowing gems. They take take root somewhere the player decides, like a planted seed or the beginnings of a city, and then they Grow (Yes i know, i took the theme thing a bit too literally, but eh whatever). 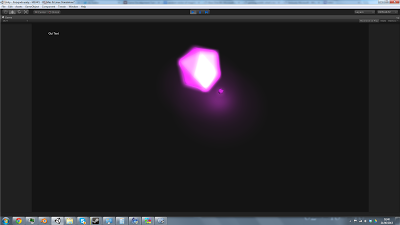 This player looks like they're just starting out, notice that each player has a different shape and color to their empire/crystal-farm. You start with 1 mature gem and a single seed, the mature gem will produce more seeds with time. You can plant seeds simply by clicking somewhere nearby the mother gem. 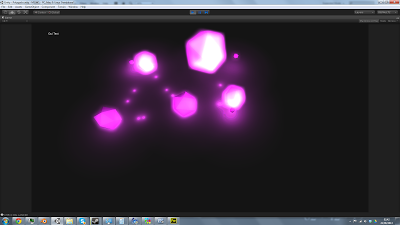 After a minute of play, the purple player has already spread out a little, empires grow rapidly in this game. The tiny glowing things moving between the gems are them passing resources between them. In essence: a large gem will feed the smaller gems, encouraging growth. Tightly packed networks will grow quickly, whereas outlying gems will grow slower without much help. You can also sacrifice seeds to increase the growth of a gem that's already been placed. 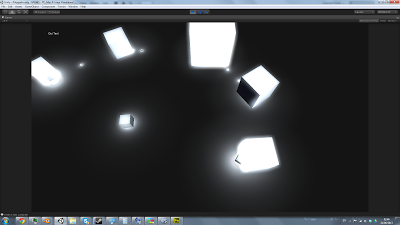 A third player, yet again a different shape and color. The white player is pretty close to the purple player, I wonder what will happen if a white gem gets into range of a purple one?

Well you'll have to wait until the game is released to see what happens. I think its safe to say this kind of game isn't for everyone, but I think making games on the edge of my comfort zone is a good thing. Once the MSJW is complete The Clark Doud project will have my full attention. Until then;