January 28, 2016
I've been playing a lot of Dungeons and Dragons 5E, more specifically i've been DMing for a few groups. Recently one of my players has moved house, so we'll have to play digitally from now on. As a result i've started making maps for use on various online Tabletop tools. I've decided that i'll share the maps as I make them on this blog.

These maps were created in Illustrator, are print friendly black and white and have low opacity borders so that they can be overlaid on top of eachother.

You are, of course, free to use the maps independent of the intended adventure. However, I have only mapped locations where combat is likely to happen in the adventure, so it might be helpful to at least skim through the scenario even if you're going to change it up. Although this was built for 5E, i've tried to keep things largely system agnostic by leaving out system specific details.

These maps are for an introductory adventure, and in total represents roughly a ~3 hour session, give or take a couple of hours due to beginner training wheels. This adventure is very much on-the-rails as it is a beginners session.

All NPCs share some common knowledge unless otherwise stated. 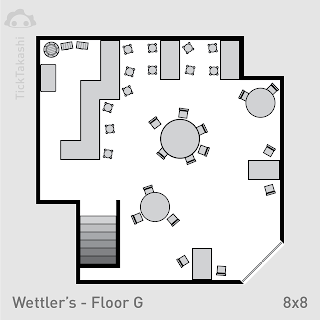 This adventure starts in a Tavern, like all good cliche introductory adventures. Generally I encourage players to chat and generally roleplay to ease into the session at this early stage.

You may also want other NPCs to mention that they feel unsafe in town, and unless Lord Dent hires more security they will consider moving. The tavern also has a downstairs storage. 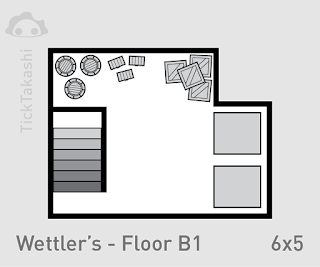 After about 30 minutes of in-game time (I like to set a 5 minute real-life timer), you should interrupt the players with something like this:


Suddenly, you hear a scream from outside. Followed by several dull thuds.

Raquelle, Lord Dents daughter, is being beaten in the middle of the street by ~3 grey-cloaked bandits. Raquelle is unconscious moments after her cry for help, and dies if no one intervenes. If the players choose to intervene then this is a combat opportunity, potentially taking place in the tavern and outside it. 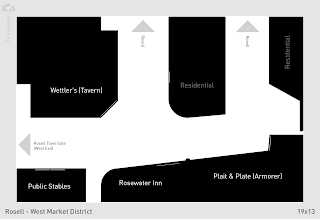 The maps are designed to be overlaid, so you can overlay Wettler's - Floor G on this map if you so wish. Also, if you want to describe the scene here its helpful to point out the Plait & Plates large emblem above the store front. This can serve as a hint should the players recover P&P merchandise accidentally without having spoken to Hamil.

At this point, the players might have chosen to interrogate a bandit, or assist the unconscious victim. If they inspect Raquelle's body.

She's covered in blood and badly bruised. You can see that she is still breathing, but just barely. She won't last very long in this condition.

The players can try to stabilize her with a (Easy Medicine) skill check. If they fail, then she dies without a heal. She wakes up after a few hours.

Either due to Raquelle or Bandit interrogation, the players will likely want to visit the Rosewater Inn. Alternatively, if they enter the alleyway next to the inn they can discover the secret entrance (Hard check if they don't already know about it). 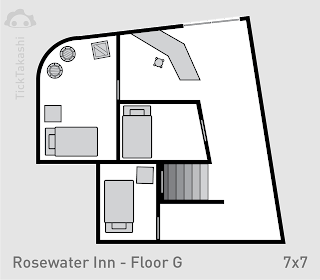 The Rosewater Inn is largely empty except for its owner.

The door at the bottom of the stairs triggers a crossbow trap if it is opened. Players with high perception can notice that something is coiled around the back of the doorknob and attempt to disarm the trap (Easy). 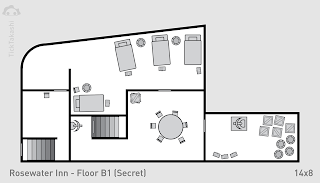 There are 6-10 bandits, including one slightly tougher Bandit Ringleader, on this floor, but none in the room on the left side where the players enter via the secret entrance in the alleyway. There are two crossbow traps connected to doors, one in the storage room on the far right (Easy detect & Easy disarm) and one at the main entrance at the staircase from the ground floor.


The note being carried by one of the bandits reads:

A sum of (Large Monetary) to be paid to each volunteer per day served. Show Dent that his town needs "The Daggers". - Z

After clearing out this hideout, the players can get rewards from Hamil Plait, and upon requesting reward from Raquelle they are told that she will take them to Lord Dent in the center of town for payment once she is done investigating a little for herself.

This is the end of the first session, but only the beginning of the story for the town of Rosell: Who are "Mannequin" and "Z"? Why are they stirring up trouble in Rosell? Who or What are "The Daggers" that Z was referring to in the note?

In the next session we'll meet Lord Dent to try and collect our reward, look for answers to some of these questions and hopefully make Rosell a safer place to live!

If you have feedback, would like to see some specific maps or have suggestions or guesses as to what might happen next, feel free to leave a comment. Otherwise, i'll see all of you adventurers next time!