December 18, 2013
So, I've been quite quiet lately, due to coursework and whatnot, but thankfully its the holidays now and i've had a little time to get back to doing personal projects. So, the first thing I decided to tackle was an official website for The Arbitrary Gamejam...

As you might already know, www.TheArbitraryGamejam.com  actually directs you to a page on this blog, this was only temporary. Eventually I want TAG to stand on its own. I've been working on the site for a couple days, so I thought i'd show it off a tiny bit. 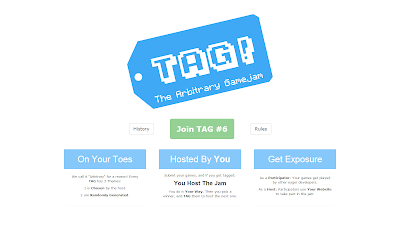 As you can see it's not finished (although, I am going for the minimalist look). The fonts are not final and the only button that is functional is the "Rules" button. Eventually the goal is to have all the important information on this one screen.

The site has been built using Rails (and Bootstrap for style points), because I've been toying with the idea of using the site to accept all the game submissions. That way, I can create a voting system so the public can express their opinions on which games are best, and give the entries a permanent home. However the downside here is that would be one less reason to visit the hosts site (Which is the whole point of TAG!). So i'll be looking for smart alternatives.

I want to make sure that the current host is really exposed on the site, so I've been playing with the idea of a custom TAG log for each host, here are some examples:

The problem with this is that I need to get logos that I can use from each host, and that's not always possible. So far this is the best way I can think of showing off the host, but I am definitely open to suggestions. Let me know in the comments if you've got an idea.

I also want to have a countdown to the next TAG in the form of a loading progress bar. But i'm not so sure about that one. I've yet to get in contact with the current TAG host (Joel Schumacher) about his preferences.

Joel, if you're reading this, get in touch!

Anyways, that's all for now. I expect to have the site up and running at full capacity sometime before new year, but who knows! It's a busy time of year. If you have any suggestions you can leave a comment below or tweet @TickTakashi.

For updates on my game projects stick around! I'll be posting something exciting in the next couple days.